Psychologists and the Surplus Approach

I noted before about the fact that historians, like McNeill use the notion of the surplus to explain how primitive societies developed economically. Their lack of modern training in economics is a blessing and they end up using at least some elements of the old classical political economy authors. This is true of physiologist and popular writer Jared Diamond (see here and here). The figure below is from the book Sex at Dawn by two psychologists,  Christopher Ryan and Cacilda Jethá. 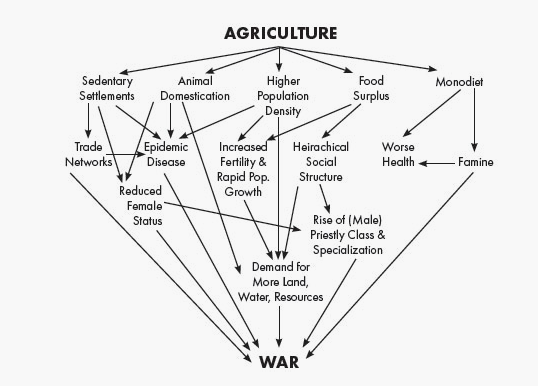 While the book is mostly about how behavior, in particular sexual behavior but violence and war too, changed with the development of agriculture, they also introduce the role of the surplus in economic development. Note that the food surplus is what allows for social hierarchy and specialization, which is what Adam Smith would have called the division of labor. And don't forget the division of labor is the basis of the wealth of nations. They also note other mechanisms associated to the development of agriculture that play an important economic role, like increased population growth (demand) and trade networks.

It is clear that while the preoccupation with the reproduction of the economy, which was central for the authors of the surplus approach, has disappeared from mainstream economics, is still very much alive in other branches of the social sciences.
By Matias Vernengo - March 14, 2014