John and Richard Toye on the Prebisch-Singer hypothesis: or did Prebisch wholly rely on Singer's work? 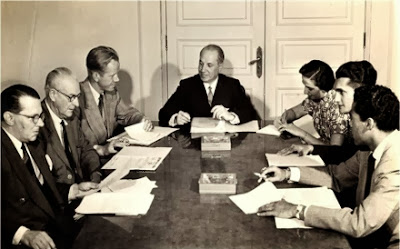 John and Richard Toye paper (subscription required) on Prebisch's contribution to the Prebisch-Singer Hypothesis has had a significant impact on the accepted view about the development their theory. They argue that in their view:


“of the events surrounding the United Nations Economic Commission for Latin America (ECLA) conference in Havana in May 1949 reveals that Prebisch did not discover independently that the terms of trade of primary products were secularly declining, but relied wholly on the previous work of Singer” [italics added].

In other words, they argue that while Prebisch is more well-known in many respects it was the work of Singer that was essential and original in determining the eponym hypothesis. Toye and Toye (2003, p. 443) do NOT argue that Prebisch was unaware of falling commodity prices, but they do suggest that he thought of this as being merely short run phenomena. In their words:


“He [Prebisch] published an article in 1934 arguing that "it is a well-known fact that agricultural prices have fallen more profoundly than those of manufactured articles," and that Argentina had to export 73 percent more than before the depression to obtain the same quantity of manufactured imports (Prebisch [1934] 1991, 341). However, Prebisch was merely noting a fact, and did not provide any theoretical analysis of it (Magariños 1991, 63-64). He saw it as a feature of depression economics, that is, as a short-run cyclical problem. He believed that the remedy was to be found in expansionist economic policies, not, as the Prebisch-Singer thesis would later imply, in major changes in the structure of the international economy” [italics added].

In other words, Prebisch's notion of a structural problem that required a radical change, industrialization, rather than just anti-cyclical macroeconomic policy, basically "wholly relied" on Singer. This is why they believe the first draft of Prebisch's famous Development Manifesto was changed, as accounted by Celso Furtado in his memoirs.

Note, however, that Prebisch was from the early 1930s starting a long trajectory of rethinking his orthodox (somewhat eclectic, but essentially marginalist) views of the functioning of the economy, one in which the fluctuations in the periphery where for the most part accounted by an connected to the oscillations on the central economies. He was also keenly aware of the changes in the hegemonic positions of the US and the UK, and the tribulations of the international financial system.

In a series of papers with Esteban Pérez Caldentey, I have argued that Prebisch was developing a dynamic theory, that would be developed fully in his classes at the University of Buenos Aires, before his Manifesto was conceived in 1949, in which cycle and trend are seen as parts of the same economic impulses. In Prebisch's discussion of the cycle in Argentina, as early as 1934, Prebisch does show awareness of the consequence of a fall in the trend of commodity prices. In the paper we note that:


“The events of the year 1929 were viewed as a further extension of the 1927-1928 cycle. Initially he dated the ascending phase of the cycle between May 1927 and September 1928 (RP, Vol, I. p. 587). Later on however, once the effects of the year 1929 were visible in the Argentine economy he states that the descending phase of the cycle started during 1929 with some symptoms appearing by the middle of 1928 (Ibid. p.613). This point is also emphasized in his 1934 article 'The Present Moment of Our Economy.' He states (RP, Vol. II., p. 158): 'If we were to judge the year 1933…by the evolution of our agricultural exports, we would only be able to say that it was an additional year of contraction adding to those that have …the Argentine economy since 1929.' Prebisch came to realize the distinct character of the Great Depression when he became aware of the profound contraction in agricultural prices. The contraction was so sharp that the agricultural price index reached levels that it had not witnessed since the nineteenth century. As he put it (Ibid., p.346-347 and also 135): 'The collapse in prices…does not constitute the usual phenomenon of cyclical reaction…rather an intense and pertinent decline to positions each time farther away from the level on which developed the relations of production and credit.' And (p. 135) 'It [the decline in agricultural prices] is not a simple return to a previous situation, but of an accentuated and progressive contraction of values, that violently upsets the economic structure of the country'” [italics added].

In other words, it is a matter of trend not cycle, and hence an antecedent of the Prebisch-Singer hypothesis, which is in fact based on his theoretical development of a type of dynamic foreign trade-multiplier story of the cycle.

Also, a careful reading of Furtado's discussion of the writing of the Manifesto suggests that what the Singer paper provided was NOT the empirical basis for a new and radical theory, but the incentive for a more militant and pro-industrialization version of the report. A change in political tone, rather than a significantly different understanding of the problems of development in Latin America, which as we have argued with Esteban, where quite solidified by this time.* As result, I would suggest that Prebisch's fame as the key thinker behind the famous hypothesis is well-deserved, and that the notion that he wholly relied on Singer is hyperbolic at best.

* However, as noted by Mallorquín, Prebisch would put on hold his more radical ideas during his long sojourn in the United Nations system, at ECLAC and then UNCTAD.

PS: For more on Prebisch go to ECLAC's website about him and his legacy here.
By Matias Vernengo - December 13, 2013