The Portuguese economy is not in the headlines as much as the other peripheral economies in crisis, but the troubles, and its political consequences are no less deep. Austerity has led to a collapse of output, that fell by around 4% in the first quarter of the year, the worst fall after Greece and Cyprus, respectively. Spreads with German bonds hiked, and two coalition ministers have resigned. However, this has been a long crisis in the making. Graph below shows industrial production (index equal to 100 in 2005) in Portugal and Germany, since the euro. 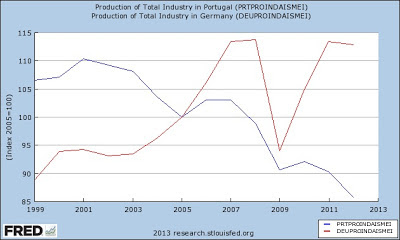 Note that the trend is there from the beginning. And it should have been expected too. No reasonable model predicts that with capital mobility and no barriers would lead to production to be spread rather than concentrated. Other than major fiscal transfers, the euro arrangement was unavoidably going to create increasing disparities. And by the way, the political crisis cannot end, if the economic collapse continues.
By Matias Vernengo - July 06, 2013