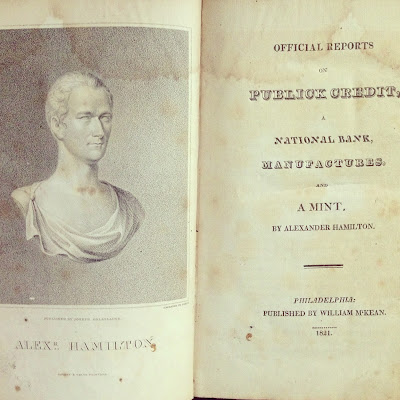 Alexander Hamilton's reports to Congress go against the grain of much of the core principles of mainstream economics. Hamilton had read the main economic authors of his time, including David Hume and Adam Smith, both of which had a much more critical view of public debt than Hamilton did. He was also influenced by policy makers like Jacques Necker (see here; subscription required), a Genevan banker and finance minister of France just before the Revolution, and Robert Morris, who is often referred as the Financier of the Revolution (see Ron Chernow's biography of Hamilton).

The Hamiltonian plan, which was to a great extent based on the British economic model, was based on the need to consolidate all debts incurred by the states under the Federal government, and to provide the latter with revenues from foreign trade, implying tariffs, and excise taxes (e.g on whisky) to allow to pay the interest on the new national debt. Hamilton argued famously in his Report on Public Credit that a well-funded national debt would be under certain circumstances a blessing, and writing about Jeffersonians* -- which would surprisingly look not very different than some members of the current GOP -- said that: "a certain description of men are for getting out of debt, yet are against all taxes for raising money to pay it off."

Further, he was for a national bank, being instrumental in the founding of the First Bank of the United States, modeled on the Bank of England. Not only the bank would promote the expansion of credit, but also it would provide funding for the government. Further, he was very clear that tariffs on foreign trade were needed not just to raise revenue, but also for the protection of domestic industry. In his famous Report on Manufactures, which advanced ideas on infant industry later developed by Frederich List (for other more recent critics of free trade go here and here), he said:


"The superiority antecedently enjoyed by nations, who have preoccupied and perfected a branch of industry, constitutes a more formidable obstacle, than either of those, which have been mentioned, to the introduction of the same branch into a country, in which it did not before exist. To maintain between the recent establishments of one country and the long matured establishments of another country, a competition upon equal terms, both as to quality and price, is in most cases impracticable. The disparity in the one, or in the other, or in both, must necessarily be so considerable as to forbid a successful rivalship, without the extraordinary aid and protection of government."

All the elements of his economic plan, discussed in his five reports to Congress (available here), were central in what eventually became known as the American System, usually associated to Henry Clay.

* Jefferson abhorred public debt, but was very fond of private debt, being constantly indebted. In 1815 he sold his library, in part to pay his debts, which formed the basis of the Library of Congress.
By Matias Vernengo - July 22, 2013