Who's afraid of foreign public debt? 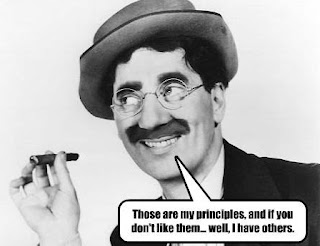 Ricardo Hausmann decided to get his two cents on the public debt debate started by the Reinhart and Rogoff debacle. Hausmann was a famous defender of dollarization (see here his instructions for implementation, because, you know, it's a no brainer; you can go here to see his predictions that emerging markets will no longer have national currencies, since they cannot borrow long term in their own currencies) in the past, when he was the chief economist at the Inter-American Development Bank, and was for it in Argentina, Ecuador and other places.

Coming from Venezuela, Hausmann knows that foreign debt and domestic debt should not be mixed. He fudges the issue and does not explicitly says that public debt in national currency is not a problem (and that you cannot default on a currency you print), but he does say that: "The level of debt does matter, and its currency composition matters even more." In other words, foreign denominated debt does matter, since a government cannot monetize a foreign denominated debt. The level that matters is the foreign one, that is, the composition. That's all, and actually this points out a significant problem in Reinhart and Rogoff's work, which does not distinguish carefully enough between foreign and domestic denominated debt.

Note that the examples given by Hausmann of countries were high public debt became problematic ("Mexico in 1994, Russia in 1998, Ecuador in 1999, Argentina in 2001, Uruguay in 2002, the Dominican Republic in 2003, and even the UK in 1976") are all in countries which debt was denominated in foreign currency (dollars for the most part). His explanation that Spain could not pursue expansionary fiscal policy, because as deficits increased interest rates also increased, misses the point that Spain debt is in Euros, and the European Central Bank (ECB) has been, for the most part, unwilling to buy enough Spanish bonds to keep their interest rates low.*

So his conclusion that you must be an Austerian in a boom in order to be able to be a Keynesian in the crisis is plain wrong. Like his defense of dollarization (which he later retracted, and suggested a plan B for Argentina). The principle that debt in domestic currency is not problematic is fine, but his defense of austerity in the face of a recession for certain situations is just plain wrong. Hopefully he will change his principles on this subject too.

* Interestingly enough Spain is like a dollarized country, something he defended in the past.
By Matias Vernengo - May 01, 2013