The US and the Euro-crisis: Lessons from a comparison 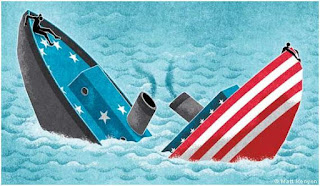 There is a striking contrast between how the eurozone and the United States have handled their economic depressions.


"The eurozone recession is now the longest on record for the single currency area, according to official statistics released last week, as the economy shrank again in the first quarter of this year. A comparison with the US economy may shed some light on how such a profound economic failure can occur in high-income, highly-educated countries in the 21st century..." (rest - see here).