In another post I pointed out one (and there are more) of the theoretical problems with Benn Steil's account of the Bretton Woods history. I would also emphasize that there are questionable historical assumptions too in his book. In particular, the book's description of both Harry Dexter White and Lauchlin Currie as Soviet spies is problematic. Steil basically accepts at face value Whitaker Chambers and Elizabeth Bentley's, two self-confesed Soviet agents, testimonies regarding White and Currie, and a certain interpretation about the revelations of the Venona Project after the fall of the Soviet Union (the original New York Times story here; subscription required).

I'm not going to get into the details, but on Currie, Roger Sandilands' paper (subscription required) is quite conclusive in my view suggesting that he did share information with Russians, but was in no way a spy. It is particularly important in this context what John Kenneth Galbraith expressed in a letter to Roger (in the paper cited, p. 99), namely:


"That he was a Soviet agent is, of course, untrue; what is true, is our failure to remember that the Russians in those days were our allies, and taking casualties beyond anything experienced by Americans. It was, in those days, official policy that we offer help, and the Russians could be certain, and rightly, of a warm reception as allies in Washington. As I say, this has now been forgotten; only those of us who were there remember our relief when they came into the War and the way they took casualties and suffering far beyond anything experienced ourselves."

On the White case the book to read is Bruce Craig's Treasonable Doubt that also suggests that the case against him is at best inconclusive, indicating that the information he shared with the Russian allies was not part of a espionage operation. This indicates that, while they passed information to Soviet agents, they did not intentionally betray the US national interests. As Julius Kobyakov, a Russian intelligence agent, suggested here: "Among the members of my profession there is a sacramental question: 'Does he know that he is our agent?' There is very strong indication that neither Currie nor White knew that." 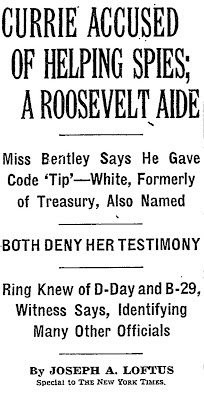 On this very topic is worth noticing what Steil himself tells us about White regarding Bretton Woods negotiations. According to him: "White wanted to make the US dollar, and only the US dollar, synonymous with gold, which would give the US government a virtual free hand to set interest rates and other monetary conditions at will -- not just for the United States, but for the world." In other words, he put US interests above anything else in the Bretton Woods negotiations, something that would make the International Monetary Fund (IMF), an institution that owes more to White than Keynes, a tool of US interests and for creditor countries in general. If he was a Soviet spy then he had his priorities upside down, or was a terrible spy.

In more general terms, I would add, it seems that the line of attack on some New Dealers, like Currie and White, tainting them as Reds or fellow travelers, is not very different from the indictment of Keynes's ideas on the basis of his sexual orientation, recently brought to general attention in the Niall Ferguson case. One cannot trust the childless-gay-commie is the not so subtle message. If you cannot attack the ideas, go for the messengers' credibility, that's the right wing nut fringe strategy.

PS: Currie and White are only the tip of the iceberg. Svetlana Chervonnaya argues, convincingly, in a paper that Alger Hiss was not the Ales of the Venona documents, and that the case that he was a spy is also open. In the Rosenberg case, the Schneirs argue that while it is clear that Julius was a spy, a low level one that did not pass any relevant information on the bomb, it is also clear that she wasn't and that the US government knew it. If the US had given him the same treatment than other spies got, with similar offenses, he would have gotten a few years of jail time, and she should have not been accused at all. On the effects of this travesty of justice on the family it's worth watching the beautiful documentary by Ivy Meeropol Heir to an Execution.
By Matias Vernengo - May 26, 2013