The Phillips curve is one of those 'regularities' that is more likely to exist in an economist mind than in reality. Figure below (from Ritschl and Straumann, 2010*) shows the 'trade-off' between inflation and unemployment in Europe in the 1920s and 1930. 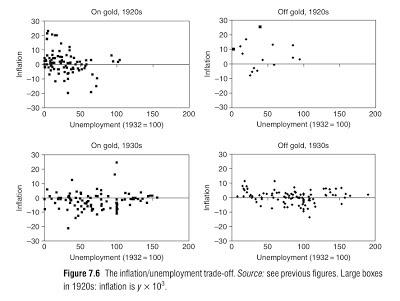 They say quite candidly:


"the seemingly obvious connection between deflation and unemployment is less than easy to find in the data. ... Yet while there was ample variation in both unemployment and inflation during the interwar period, no systematic pattern seems to emerge in the data, even if the 1920s and the 1930s are looked at separately. The picture emerging from Figure [above] is rather that the natural rate of unemployment moved quite independently of inflation, irrespective of whether or not a country was on gold" (italics added).

Seemingly obvious, but inexistent in the data. In doubt economists choose the obvious and avoid reality. The other possibility that they do not seem to consider is that there is no natural rate at all, and no systematic relation between inflation and unemployment. Consider the data for the United States below (CPI change and unemployment data from Fred). 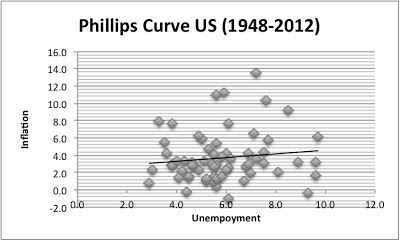 Note that there is also no clear correlation, unless you start assuming that it is unstable, and the curve is jumping, or that a supposed natural rate is jumping around too. Occam's Razor would suggest that if you have a theory that does not postulate any systematic relation between prices and quantities** it should be simpler and, hence, preferable.

** Note that classical-Keynesian theory implies that prices are determined by the technical conditions of production and exogenously determined distribution while unemployment derives from effective demand. Also, unemployment might have an indirect effect on inflation, through the effects of unemployment on the bargaining power of workers and, thus, on income distribution.
By Matias Vernengo - January 19, 2013

Lula's election and what lies ahead

It's been a while since I wrote about the Brazilian crisis (a summary of the previous catastrophic election here ). In part that electio...