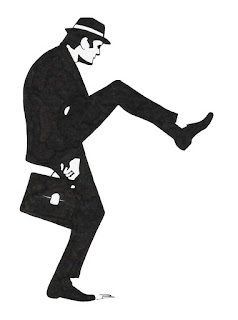 The ministry of silly budgets

Philip Larkin was wrong; failure actually does come dramatically indeed. Or so it seems if you look at the failure of the fiscal policies of the Tory cabinet. John Lanchester has a great piece in the new issue of the London Review of Books showing the perverse effects of austerity. Yes the multiplier works, and it is rather large he contends.

As much as the story of the Cameron/Osborne failure [they've promised to reduce the deficit from 4.8% of GDP to 1.9% and delivered after two years a mild hike to 4.9%], or the problems with the 'independent' Office of Budget Responsibility [you have to love the name, it's like they work for the Ministry of Silly Walks] and the additional nuggets on IMF revisionism, there is an interesting take on the history of economic ideas.

Lanchester correctly points out that:

Lucas suggested that if you talked about Keynes at a conference people would giggle. Note that Richard Kahn, the one that formalized the multiplier in 1931, one of the few theoretical concepts that has direct economic policy applications and is passible of empirical falsification, did not win the Sveriges Riksbank Prize (known as the Nobel).

Even better, he actually gets a good definition of what would be essential in economics. In his words:


"Richard Feynman was once asked what he would pass on if the whole edifice of modern scientific knowledge had been lost, and all he could give to posterity was a single sentence. What axiom would convey the maximum amount of scientific information in the fewest possible words? His candidate was ‘all things are made of atoms.’ In a similar spirit, if the whole ramshackle structure of contemporary macroeconomics vanished into thin air and the field had to be reconstructed from scratch, the sentence which packs as much of the discipline into the fewest possible words might be ‘governments are not households’ (Italics added)."

Mine would be 'demand determines income,' but we are splitting hairs. The orthodox would be either 'markets are efficient' or 'supply creates its own demand.' And here lies a crucial problem. These last two are actually quite well known (Efficient Market Hypothesis and Say's Law), but the heterodox ones are not. Not only we have worse PR, but also when the mainstream fails it is very good at avoiding any blame. In fact, even Lanchester, in an otherwise perceptive discussion, falls into the trap that a good one sentence definition of the field of macroeconomics would be "nobody knows anything." Not true, 'the mainstream knows very little' would be better.
By Matias Vernengo - December 28, 2012