Economists do it with models, again 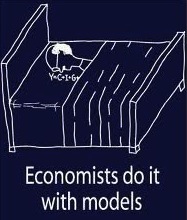 Updating my blog on Nate Silver's FiveThirtyEight.com model forecasts, I left the story in the aftermath of the RNC when it looked like any Romney bounce was below the expectations built into the model. Prior blog linked here.

At an 80.0% probability of winning, Obama's win should be categorized as likely on the scale election forecasters appear to use.

I write these words, of course, with pleasure given my political bias. But also with fascination at the extent to which Nate Silver has gone to build a model which responds to the most important inputs to the eventual election outcome. Econometricians, good ones, rock!

This is a clumsy way to show the model output, but the site does not permit a link to just the graphs afaik. And I wanted to visually document the clear uptrend in Obama's winning probability as of this date. 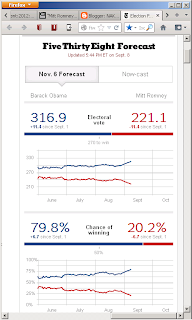 Early Sunday update: Nate Silver has found faith in his model (it's OK Nate, you have the best model I am aware of): link here.