More on Sraffa and the theory of value and distribution 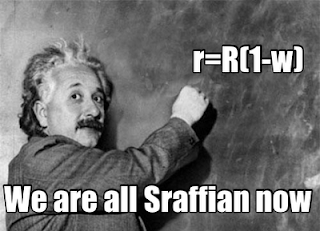 Two posts by Alejandro Fiorito, at the Revista Circus blog, and Robert Vienneau follow up my previous post on Sraffa and the Labor Theory of Value (LTV). The former is on the debate between Garegnani and Samuelson, just published in a book edited by Heinz Kurz. Garegnani, who debated with Samuelson since the latter's seminal paper on the production function as a parable back in the early 1960s, basically argued against the notion that Sraffa's system can be seen as a special case of Walrasian General Equilibrium, which was ultimately Samuelson's position.

Vienneau discusses several issues. One that I think it's particularly relevant is Steedman's view that one might have a positive profit rate and negative aggregate surplus value. Serrano and Lucas (not that Lucas!) have written a paper on the subject which suggests that Steedman's counterintuitive results are basically irrelevant. At any rate, as noted by Robert, "Marxist political economy should remain a live and exciting field of scholarly research," and this is to a great extent possible because of Sraffa's legacy.
By Matias Vernengo - August 20, 2012