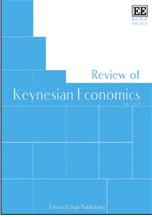 It is widely recognized that economic crises can sometimes trigger enormous change, both with regard to economic theory and the politics of governance. Today, the global economy is struggling with the fall-out from the financial crash of 2008 and the Great Recession of 2007-09. The economic crisis that these events have generated, combined with the failure of the mainstream economics profession, has again put the question of change on the table.

With regard to the economics profession, it stands significantly discredited owing to its failure to foresee the recession and the financial crash; its repeated over-optimistic forecasts of rapid recovery; and lack of plausibility surrounding its attempts to explain events. Reasonable people do not expect economists to predict the daily movements of the stock market, but they do expect them to anticipate and explain major imminent economic developments. On that score the profession failed catastrophically, revealing fundamental theoretical inadequacies.

This intellectual failure has prompted us to launch the Review of Keynesian Economics. At a time of journal proliferation some may wonder about the need for another journal. We would respond there is a proliferation of journals but that proliferation is essentially within one intellectual paradigm. As such, it obscures the fact that the range of theoretical inquiry is actually very narrow. A journal devoted to Keynesian economics is therefore needed both to correct this narrowness and because events have once again confirmed the profound relevance of Keynesian theory.

The crisis associated with the Great Depression of the 1930s inspired John Maynard Keynes to write The General Theory of Employment, Interest and Money, a book that explained the persistence of unemployment in monetary economies. Keynes’ theory had enormous influence both inside and outside the academy, and his ideas on the importance of effective demand triggered a remaking of macroeconomics that saw Keynesian theory displace classical macroeconomic theory. That displacement was driven by the failure of classical theory to account for the Depression and the corresponding explanatory success of Keynesian theory. Moreover, not only did Keynesian theory provide an explanatory framework, it also offered practical policy recommendations. After World War II, the Keynesian theoretical revolution inspired new policy thinking that contributed to a twenty-five year period of unprecedented prosperity, now widely referred to as “The Golden Age” of capitalism or “The Age of Keynes”.

From 1945 to the early 1970s, the global economy witnessed an unparalleled period of prosperity that came to an end with the collapse of Bretton Woods (1971), the first oil crisis (1973) and the stock market crash of 1973-74. During this period of almost three decades, the world enjoyed rapid growth, low unemployment and reduced inequality, making Keynesian policies a success by most measures.

The counter-revolutionaries were successful in their project and recaptured control of macroeconomics in the late 1970s. Their success was driven by a range of factors including their own intellectual imagination and innovation, intellectual staleness among Keynesians; the Cold War, which promoted laissez-faire ideology; and inflation and political conflict triggered by income distribution conflicts fostered first by full employment and then by the oil shocks of the 1970s.

Most importantly, the counter-revolutionaries opportunistically exploited the intellectual confusions created by the oil supply shocks of the early 1970s. Those shocks unleashed a new supply-side phenomenon of stagflation, which the counter-revolutionaries asserted disproved Keynesian macroeconomics. In retrospect, we know those assertions were false and Keynesian theories of conflict inflation gave a good account of developments, but the dispiritedness of the late 1970s initiated an era of reaction, which included reaction in economics.

The inflationary pressures of the 1970s, with the concomitant rise of conservatism in the form of the Reagan-Thatcher movements, were instrumental in the revival of classical macroeconomics and the repression of Keynesian economics. These forces have now waned but they have locked-in a legacy that is hard to reverse. That is because notions such as the natural rate of unemployment are entrenched in macroeconomics discussions and, most importantly, in teaching manuals.

The consequences of the return of classical macroeconomics have been enormous. For society it has entailed an era of neoliberal policy dominance that has contributed to wage stagnation and massive income inequality, which is significantly responsible for the Great Recession and the prospect of stagnation. Economic theory and politics often march hand-in-hand, with theory reinforcing politics and politics reinforcing theory. Together, they both drive policy, making economic theory vitally important for society.

In the end, economic theory is a contested terrain that is fought over by different intellectual tendencies, which may reflect different political and ethical values. In the years after World War II Keynesianism was ascendant, but since the late 1970s classical macroeconomics has been ascendant. Such ebbs and flows are reasonable, and even desirable, in an open society. However, what troubles us is that the period of classical re-ascendance has been characterized by what we think is a closing and monopolization of intellectual space, whereas the period of Keynesian ascendancy was marked by intellectual pluralism.

This closing of economics is significantly attributable to the laissez-faire ideological predispositions of new classical macroeconomics. It has also has been driven by economists’ disdain for epistemological concerns, which has fostered intellectual intolerance and over-reach. Competing theoretical paradigms have been framed inappropriately in terms of truth versus error, a frame that inevitably drives exclusion of the paradigm labeled as being in error. This framing is supported by an erroneous belief that science produces a single true answer. Much vaunted mathematical rigor is built on conceptual narrowness and sloppiness, and the use of math is as much a rhetorical device for selective screening of ideas as it is for exploring the logical coherence of ideas.

These flawed practices have distorted the academy, and in doing so have had profoundly negative consequences for society. That concerns us in our dual identities as professional economists and citizens, and it is this concern that motivates the founding of the journal.

This openness to all forms of Keynesianism reflects a desire to avoid intellectual sectarianism, which we think has afflicted past Keynesian discourse. In our view circumstance and ability certainly contributed to the success of the classical macroeconomics counter-revolutionaries, but so too did intellectual and sociological failure among Keynesians. Their tendency to apply arbitrary litmus tests and engage in intellectual sectarianism did a disservice to their project, and in doing so did disservice to society. We want to avoid repeating that history.

The contract with the journal publisher, Edward Elgar, was signed in 2011. We, the founding editors, are very happy with this timing as 2011 marked the seventy-fifth anniversary of Keynes’ General Theory. The founding of the Review of Keynesian Economics is a fitting tribute and celebration of this anniversary. It is also part of the deeper response needed to meet these challenging economic times.

The journal will be dedicated to the development of Keynesian theory and policy. In our view, Keynesian theory should hold a similar place in economics to that held by the theory of evolution in biology. Many individual economists still work within the Keynesian paradigm, but intellectual success demands institutional support that can leverage those individual efforts. The journal aims to offer such support by providing a forum for developing and sharing Keynesian ideas. Not only does that include ideas about macroeconomic theory and policy, it also extends to microeconomic and meso-economic analysis and relevant empirical and historical research. We see a bright future for the Keynesian approach to macroeconomics and invite the economics profession to join us by subscribing to the journal and submitting manuscripts.
By Matias Vernengo - March 02, 2012

Email ThisBlogThis!Share to TwitterShare to FacebookShare to Pinterest
Labels: Keynes