In a previous post I have referred to the Fiscal-Military State, and Brewer's classic book on it. It is worth remembering, for those afraid about debt these days, that public debt in the UK during the Napoleonic Wars peaked at more than 250% of GDP.

One of the important ways in which the British were able to out-finance the other major European powers, fundamentally France, during the 18th century was the ability to borrow long at at low rates. The graph below shows the proportion of unfunded to funded debt (from Brewer's book). The UK rapidly moved from almost 100% of unfunded debt to less than 10%. 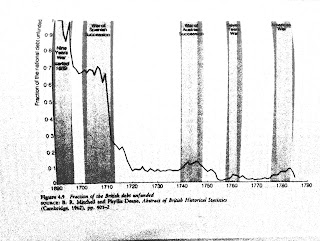 Funded debt, was debt for which specific taxes were set aside to service it, and it tended to be long-term, while unfunded debt was usually short-term debt. Debt service consumed a great amount of the budget, but that was simply the result of the incredibly large amount of debt, since interest rates remained relatively low. I guess the lesson is that long term debt in your own currency is okay.
By Matias Vernengo - February 08, 2012