Amity Shlaes is a Keynesian after all! 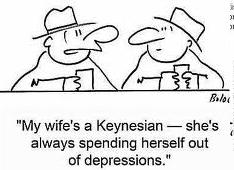 ﻿
Amity Shlaes has argued that the New Deal made things worse in the United States, prolonging the Great Depression in her popular book The Forgotten Men (for a devastating critique go here or here). Now she tells us that it was not so. True to her conservative convictions she argues that nation building abroad is a good thing. The explanation of why nation building is actually a good thing is where she gets confused and argues on the basis of Keynesian logic.

So her point is that if the multiplier has only limited effects then it is not a Keynesian argument! The notion that the multiplier effect is based on public choice (Mancur Olson) and not on her bête noire John Maynard Keynes –  whose ideas she describes as "sheer fallacies" (2008, p. 272) –  is farfetched.

The multiplier, developed by Keynes student and disciple Richard Kahn, says exactly that spending generates income, and leads to higher levels of output and employment. And of course it does not imply that the effects are unlimited, but only that they are positive (she used to argue that they were negative reducing growth, as in the New Deal).

Even if you say, like she does, that the multiplier only works in the short run or more precisely for a limited period of time, and then you need confidence or trust to maintain growth, it is still the initial spending that kick started the growth process. And yes she even gets that confidence is the result of the initial spending, and not vice versa. At the end of the day, she basically thinks Military Keynesianism works abroad. Perhaps the should invade the , and start nation building at home.
By Matias Vernengo - February 16, 2012