The political economy of flat taxes 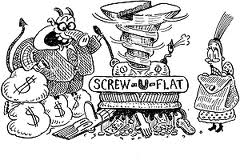 The GOP has revived this season the ghost of the flat tax. Cain is for the 999 plan (whatever that is) and Perry for a 20% flat income tax (see here, for example). I haven't seen any particular analysis of the Perry plan so far, but it won't be much different from the Cain breakup. For example, the Tax Policy Center (here) shows that Cain's plan would increase the federal taxes of the lowest quintile by 18.3% while reducing that of the top 0.1% by 17.9%.  And that's not class warfare! You don't need to be a rocket scientist to know that when you hear flat tax it's all about reducing the taxes of the rich.

Taxation was, by the way, always a key concern of classical political economy (it's there in the title of Mr. Ricardo's Principles). One of the most famous tax proposals of the 19th century, Henry George's single land tax, was in fact based on the 'Ricardian' theory of the rent. That is, the idea that landowners derive their income (rent) from ownership, and that their income (for a given level of output) detracts from profits and the possibilities of accumulation, required a tax to transfer income against wealthy landowners.

The interesting thing is that since the old classical surplus approach makes it clear that class conflict is essential for understanding the functioning of the economy, it does not try to disguise the issue of taxation as not having distributive consequences.
By Matias Vernengo - October 30, 2011