More on the employment news

Just to add to Steve's discussion of the terrible jobs situation, the graph below shows that the stimulus was enough to reverse the downward trend in non-farm employment (to download go here), but not enough to maintain a healthy recovery. 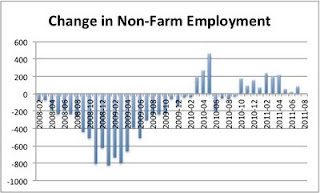 By mid-2010, when the stimulus package started to wind down, employment creation basically stalled. There is some additional employment growth after the late 2010 fiscal package, but that is gone now.  Only in May 2010 more than 400K jobs were created. I'm all for the government hiring workers if the private sector doesn't, as in Steve's proposal, but I'm sorry to say that I don't think Obama, let alone Congressional Republicans, will move in that direction.

PS: Some of the employment creation in 2010 was the result of direct government hiring for the Census, by the way.
By Matias Vernengo - September 02, 2011