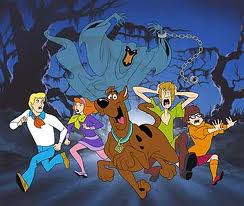 Kids are afraid of monsters, and so are Republican candidates apparently. The inflation monster that is. It really makes it hard to teach macro, since lots of students still think, because of the unrelenting 24 hour media coverage of GOP debates that since money supply increased (from about 7.5 to close to 9.3 trillions from Dec. 2007 until last July, using M2) we are in for a huge increase in prices. Hyperinflation should be around the corner.

It's not. As anybody with common sense knows the velocity of circulation does change (fell from slightly more than 2 to around 1.7 for M2), and the increase in money supply has no effect on spending. Banks are not lending, since demand is not growing sufficiently (if in doubt search endogenous money, now known as MMT, Modern Monetary Theory). And inflation has been subdued as the graph below shows (2011 is an IMF forecast for CPI inflation), even more after the 2007-8 crisis. 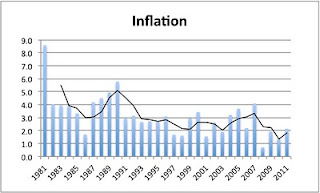 Inflation has increased a little bit in 2011, fundamentally associated to higher energy and food prices, but the pass-through to general prices in the US is relatively small (black line is a three year moving average). As noted by Adam Posen, central banks should continue to maintain low rates of interest. Unless they believe in monsters!

PS: Funny coincidence, after I posted this I saw that Krugman uploaded a graph of M2 velocity after the 1960s here.
By Matias Vernengo - September 19, 2011