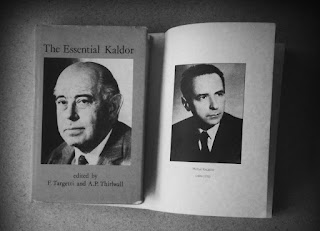 A few years back Sam Bowles presented a paper (Kudunomics: Property rights for the information-based economy) at the University of Utah. At dinner he reaffirmed his conviction that Arrow-Debreu General Equilibrium (GE) is compatible with different kinds of behavior and can be a force for progressive economics. Conventional marginalist theory suggests that income distribution is the result of relative scarcities, and, as a result, real wages should equal the marginal product of labor, i.e. labor productivity. When asked how he squares the belief in GE with the fact that wages in the US do NOT follow productivity since the 1970s, Bowles seemed puzzled. And the relation of income distribution and growth remains puzzling for the mainstream and its sycophants.

In the heterodox camp, the discussion has been centered, for the most part, between the so-called Kaleckian and Kaldorian models. First, I should note that from a history of ideas point, the Kaleckian name is a misnomer. Kalecki’s models where about the interaction of multiplier and accelerator, with shocks and lags, to produce fluctuations. In the various forms of his accelerator equation Kalecki included a trend, producing fluctuations around a trend. The so-called Kaleckian models derive from Harrod and Joan Robinson’s attempts to extent Keynes’ Principle of Effective Demand (PED) to the long run.

The PED says that an increase in investment is matched by an exact increase in savings, and that the level of income is the main adjusting variable (rather than the interest rate as in the Loanable Theory of Funds). The Kaleckian models basically normalize the IS identity by the capital stock, assume (in the extreme case) that the propensity to save out of wages is zero, and a propensity to save out of profits (s) between zero and one, and in Keynesian fashion have investment determine savings. The difference with the short-run story is that now accumulation (investment-to-capital ratio) determines income distribution (the rate of profits), a result often referred to as the Cambridge equation.

The various incarnations of the Kaleckian models are defined by the way the investment function is specified. For example, in the influential paper by Bhaduri and Marglin (B-M) (subscription required) they argue that investment and savings are functions of the profit share (h) and capacity utilization (z). In other words:

Solving for z and deriving with respect to h we have:

As I suggested in my previous post, there are some theoretical problems with the type of model used to argue that the US economy is profit-led, besides the empirical ones alluded before. The independent investment function suggests that capacity utilization affects capital formation, if capacity is low there is more investment, and vice versa when z is high. In other words, firms would try to adjust capacity to demand. If that is the case you would expect that a normal relation between capacity and demand would be established in the long run (in the neoclassical view demand adjusts to capacity; that’s Say’s Law), which could be seen as the relatively stable output-to-capital ratio over the whole period for the US, in my previous post.

If that is the case, investment is determined by the adjustment of capacity to exogenous demand in order to reach the normal capacity utilization, and it is essentially derived demand (the accelerator principle). It is not instrumental in determining the normal level of capacity utilization, which must be determined by the exogenous components of demand. This is the basis of the supermultiplier models, first developed by Hicks, and then by Nicholas Kaldor, and referred to as Kaldorian in the heterodox literature (for more on that see this paper).

That is the essential difference between the Kaleckian and Kaldorian models, whether investment is partially autonomous and determined by profitability or it is derived demand. Of course income distribution in Kaldorian models might have ambiguous effects on growth, but firms would not investment more if profits went up, if there is no increase in demand. In this sense, worsening income distribution might lead to higher growth if demand keeps going for some reason (say more private debt stimulates consumption; or stimulates the consumption of a higher income group). But in general profit-led growth that stimulates investment, as in the M-B framework seems hard to explain from a theoretical point of view. Hence, the confusion it generates empirically (e.g. in the case of the US the notion that a debt-led consumption boom is a profit-led story).

PS: The typical Kaldorian model is based on Thirlwall's work, but the book by Bortis and Serrano's dissertation (or his paper; subscription required) are essential readings.
By Matias Vernengo - May 04, 2011