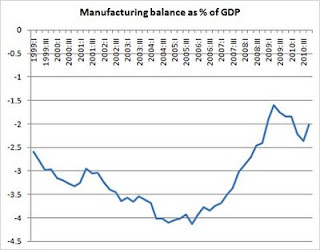 ﻿
Krugman correctly points out that depreciation has had a role in the reduction of the manufacturing trade deficit in the US (above).  However, he forgets to say that the recession was also instrumental in reducing the deficit.  While he is correct that those that are afraid that depreciation would lead to the collapse of the dollar (a hysterical exaggeration), and do not see the positive role of a depreciation, it is also true that the reduction of the deficit is not all good news. A reduction that results from a recession is hardly good news.

Note also that it is important to explain why the manufacturing sector is key for the economy. Nicholas Kaldor used to argue that it is manufacturing growth that drives productivity change (and that productivity in agriculture and services is derived). In that sense, as I noted before, even though employment in the sector have shrunk and the trade balance in the sector has been perennially negative, the US is still the leading innovator in the sector.
By Matias Vernengo - May 20, 2011