It must be hard to be a Monetarist! 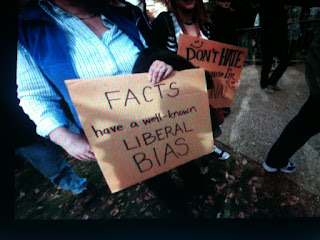 Stephen Colbert is right; reality does have a liberal bias.  Or at least that is what the new study by D’Agostino & Surico posted at voxeu.org seems to suggest.  They forecast inflation using a Vector Auto-Regression (VAR) model.  They test for the relation between inflation and money, inflation and output, and inflation and past inflation in the United States from 1904 to 2004.  Their results show that:

“Under the gold standard, the Bretton Woods system and most of the great moderation sample [in other words, almost the whole sample] money growth and output growth had no marginal predictive power for inflation;”

And “output growth had marginal predictive power for inflation in only two periods: (i) the years that extend from the great inflation of the 1970s to the early 1980s … and (ii) the years between 1997 and 2000.”

In other words, money supply is never significant, output very seldom, and the only thing that really matters is past inflation.  So much for monetarist views according to which money supply explains economic history!  In the face of this paper, the only puzzling question is why the Monetarist view of history, as expressed in Friedman & Schwartz, and more recently in Meltzer, is still so popular.

There explicit conclusion is that: “the results reported in this column are consistent with the idea that a policy regime which successfully stabilizes inflation makes it harder to improve upon the forecasts based on “naive” models.”  English translation: the conventional idea that too much demand triggered by monetary expansion causes inflation does not work when compared to the simple idea of inflationary inertia.  Inflation is high if it was high in the past.

The first period in which output growth has predictive power is, incidentally, a period in which commodity prices boomed, and that means that inflation might be orthogonal to output growth, even if both are correlated.  The second period was associated to both a stock market and a housing bubble, and asset price inflation may also not result from full employment (output increasing beyond its potential).

They should have explicitly noted that periods (monetary regimes) with low inflation could not be explained simply by lack of excess demand or monetary expansionism, since those are ruled out by their own econometric work.  I wonder what explains monetary regimes that produce price stability?  Interestingly enough the authors do not seem to have an interest in what causes past inflation or price stability!

PS: Thanks to Steve Bannister for directing me to their post.  He may have something to say later on the advantages and the limitations of the econometric techniques used by the authors.  Also, he is giving a talk on heterodox approaches to econometrics this coming Friday.  Will post a link to his talk later.
By Matias Vernengo - April 18, 2011