Chávez and the left in Latin America

Chávez has passed away, and there will be a lot of reviews on his tenure, much of it biased and incorrect I'm afraid. As noted by Mark Weisbrot not long ago: "such is the state of misrepresentation of Venezuela – it is probably the most lied-about country in the world – that a journalist can say almost anything about Chávez or his government and it is unlikely to be challenged, so long as it is negative."

Growth performance, after the failed coup in 2002 and the oil strike, was reasonably good, and the recovery from the 2009, was not the best in the region, but has been steady. The average growth rate between the debt crisis in the early 1980s and the election of Chávez was around 2%, while in the post-Chavéz era it was around 2.3%. If one takes the post-crisis period, starting in 2004, with the commodity boom, growth was around 5.5% or so (see graph below). Mark provides a good analysis of the Venezuelan economy here. 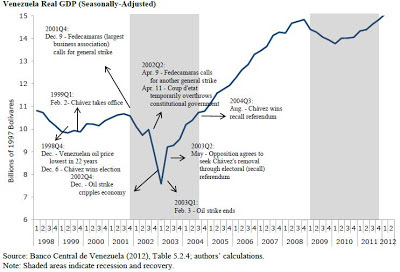 More importantly, the oil boom allowed space for redistribution policies. Chávez was the central figure in what has been termed natural resource nationalism, which has been central in the rise of left of center governments in South America. One characteristic of these governments is that functional income distribution improved as a result of increasing social transfers. As noted in UNCTAD's last Trade and Development Report: "the share of wages increased significantly in Chile (during the 1990s), the Bolivarian Republic of Venezuela (since 1997) and Argentina (since 2003), although it did not return to its previous peaks" (see graph below). 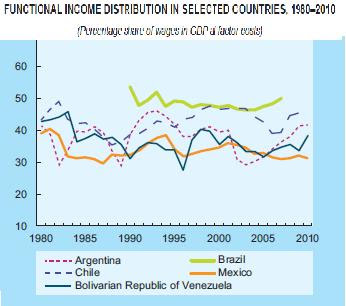 That does not mean that everything is fine with the Venezuelan economy. The limits of a model based on the exploitation of natural resources are difficult to overcome, and some authors like Leonardo Vera, had noted the problems of low labor productivity growth, particularly in the industrial sector.

A balanced view of Chávez would probably have to admit that he did reasonably well. But you might read a lot about the end of the dictatorship, and the return of democracy. For that it's worth remembering what Mark noted (in the same piece quoted above): "here is what Jimmy Carter said about Venezuela's 'dictatorship' ...: 'As a matter of fact, of the 92 elections that we've monitored, I would say that the election process in Venezuela is the best in the world'."
By Matias Vernengo - March 06, 2013