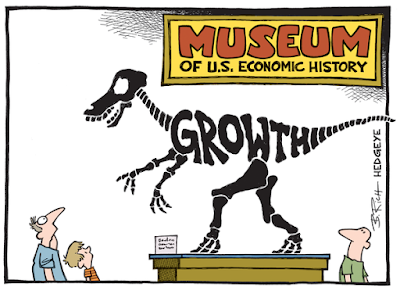 Mauro Boianovsky and Roger Backhouse have written a brief post on the topic, based on a longer paper. As I understand the modern version, due essentially to Larry Summers, it basically suggests that there are insufficient investment opportunities, or a savings glut to use Bernanke's hypothesis, discussed here before. I explained why it doesn't seem particularly compelling story in that previous post. If public spending picked up in the US, so would private investment, and the savings glut would vanish. Yes global imbalances would increase. That would be good. Global imbalances would solve the 'secular stagnation' problem.

Note that the Summers' view is different than the Robert Gordon's view, but not incompatible with it, according to which the innovations of the third industrial revolution are less transformative than those of previous waves of technological change. As noted before also, since I believe the evidence for demand driven technological innovation is strong (something called Kaldor-Verdoorn's Law) I don't think there is much to this argument either. The Gordon hypothesis assumes that innovations are supply side determined, like most neoclassical economists, including Schumpeter.

Boianovsky and Backhouse point out something that I didn't know, since I didn't read Hansen's original paper on this, I might add, that the Turner's hypothesis about the closing of the Western frontier played a role in Hansen's stagnationist hypothesis. Not sure what's the mechanism, so I'll check and report back on that. Also they seem to suggest that Domar's debt sustainability condition depends on the Harrod-Domar model. That result, as far as I understand it, is completely independent of the growth model.

I should also note that the only forgotten author in this revival of the stagnationist thesis, is the most interesting of them all, namely: Josef Steindl, author of the 1952 classic Maturity and Stagnation in American Capitalism. Stagnation resulted from the oligopolistic structure of mature capitalism, in his view. Steindl was famously wrong, in the sense that the 1950s and 1960s were not a period of stagnation.* But at least his explanation pointed out in the direction of social conflicts imposed by the productive structure of advanced economies. As I said on my previous post on the topic, there is no secular stagnation problem, associated to lack of investment opportunities, in my view. There is a political problem that precludes more fiscal expansion, or in Steindl's terms, it's stagnation policy.

* An issue he discusses in his 1979 Cambridge Journal of Economics paper (subscription required).
By Matias Vernengo - May 21, 2015