So there has been some fuss about whether Argentina default was good or not for the economy, because of a terrible article in the New York Times (here). Krugman correctly noticed that this was nonsense and was praised by Dean Baker. I think that it is important to note the role of devaluation (and noted that in comments to both blogs), but wouldn't disagree with Krugman that it's important to emphasize that defaults are not followed by catastrophes and that Argentina is actually a terrible example if one wants to make the opposite case.

At any rate, an Argentine reader (using a pseudonym) got really angry with me, and said some obviously incorrect things about Argentina (and Brazil to boot). But one of his points shows that it is important to clarify at least one fact. The graph below shows real wages in Argentina, with official data, and data from alternative sources that can be obtained in a paper by Roberto Frenkel and Mario Damill (here). 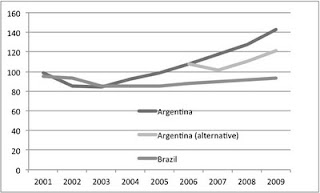 Note that real wages in Argentina have grown irrespective of what inflation index you use. And yes, in Brazil they did stagnate. The recovery of real wages is central to understand, not just the evolution of the economy, but some of the political events that lead to people, like the anonymous blog commentator, to be so angry. But as I told him, using Moynihan's fantastic dictum, a person is entitled to their opinion, not their facts.

PS: The data for real wages comes from ECLAC; the alternative index for Argentina was calculated by deflating the series with the inflation data in the Frenkel and Damill paper.
By Matias Vernengo - June 26, 2011