Slow Posting, Hyperventilation, and the Wrong Lesson for the Left 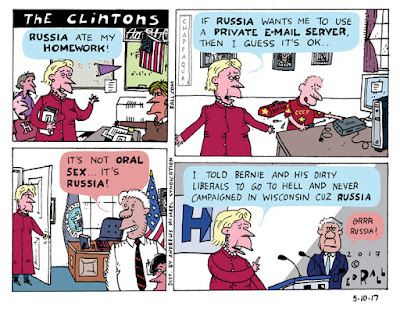 Still grading, so slow posting for a while. Just a brief note on the whole firing of Comey scandal that is still unfolding, and the incredible degree of anxiety on the left, which somehow thinks this means that there is a 'pee' tape and that Trump will be eventually impeached (here, for example; too many of these). This is at least the second event compared to Nixon's firing of the Attorney General, the infamous Saturday night massacre. The other being the firing the Acting Attorney General Sally Yates.

All of these is very unproductive and dangerous for progressives in my view. It emphasizes an interpretation of the election that is deeply flawed. That Hilary was a strong candidate, that she was progressive, that she would have won (yeah, I know she did win the popular vote; but that's not the way it works) if Comey didn't discuss the emails days before the election, or the Russians didn't hack her campaign, or if Wikileaks didn't expose them.

It exempts the Dems from being just the other pro-business, slightly less crazy, but pro-business nonetheless, pro-free-trade, pro-Wall-Street party. It reinforces the already strong Neoliberal wing of the Party, that with the help of Obama and the Clintons (all making huge amounts of money in the speaking circuit) elected Perez for the DNC, and might end up with another candidate that will loose the election in the Rust Belt (here and here for my views on the election).

The real danger is eight years of this madness (and my guess, that's much more probable than an impeachment right now), unless progressives within the Democratic Party take over. So sure, investigate, resist, but please, pretty please, let's stop with this notion that all was the result of Russia, and that the Neoliberal wing of the Democratic Party is blameless.
By Matias Vernengo - May 10, 2017