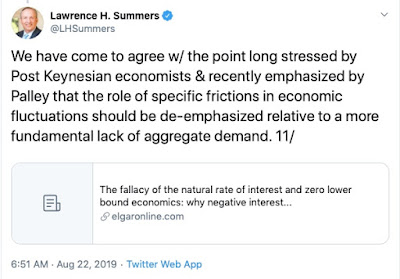 On of the issues between more mainstream Keynesians and their more heterodox counterparts is whether frictions are central for Keynesian results or not. Since the Neoclassical Synthesis the conventional view is that some rigidity or friction was behind the problems of unemployment, be that the liquidity trap (the Keynesian case with the flat LM, since Hicks 1937), the rigidity of wages (since Modigliani 1944), or some other coordination problem (mostly in the New Keynesian literature).

In this recent thread (worth reading all) Summers (as shown above) notes that posties might have been right on emphasizing the fundament issue of effective demand. That of course is closer to what Keynes himself would have thought. The paper he cites, by Tom Palley, co-editor of the Review of Keynesian Economics (ROKE) is free and available here.
By Matias Vernengo - August 22, 2019