Writing a paper on Latin America. Nothing particularly relevant to report. I was just checking the date. Many sources to get the data. I suggest both the World Bank Development Indicators and the Conference Board Total Economic Database. At any rate, below GDP growth from the Golden Age (after the Korean War and up to Debt crisis) to the Neoliberal Era (starting in the 1990s). 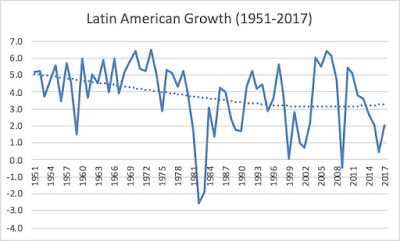 Clearly growth has been more volatile and at lower rates. So much for the notion that Neoliberalism works.
By Matias Vernengo - March 15, 2018