Does anybody really want to solve this mess? On the European Crisis

It has been more than five years since Ireland had to rescue its failing banks. Almost four since the beginning of the crisis in Greece. Something similar for the explosion of the housing bubble in Spain. France is submerged in a persistent recession, like Italy. A 0.1% “growth” in a quarter is celebrated as an irrefutable proof of the “success” of the austerity programs. In the most realistic scenario, the Eurozone face a long decade of stagnation, high unemployment and rising social tensions. Many of the solutions are disregarded, never considered, such as a fiscal union or Eurobonds. Others are sabotaged, such as the banking union. Debt restructures are postponed for years, even though their necessity is plain to see. Somebody may ask, why hasn’t the Eurozone crisis been solved by now? At this stage, it is hard to avoid the conclusion that the crisis has not been solved because there is no intention to solve it. But who does not have that intention?

Some countries performed better than others, so one cannot safely state that no country succeeded in this period. However, there are sectors that did succeed. In this piece I want to focus on one of such sectors, with a huge influence in the decision-making spheres of European politics, which faced high risks at the beginning and throughout this stormy period, but which has seen events develop in its favor and now is starting to push towards the split up of the Eurozone. I will not present new information, but I do intend to briefly offer an interpretation of why they have done better than most and why are they in the position they are. I am talking about the big German banks. I also hope to make clear convincingly what economic benefits the German government has obtained by playing along with the interests of the banks, except in very specific situations, about which more will be said later.

The basic underpinning of this post is illustrated by graphs 1 and 2. Both show the exposure of German banks to selected countries of the periphery, based on data from the BIS (Table 9d of the Consolidated Banking Statistics). The black curve in graph 2 corresponding to Cyprus is measured in the right-hand-side axis. 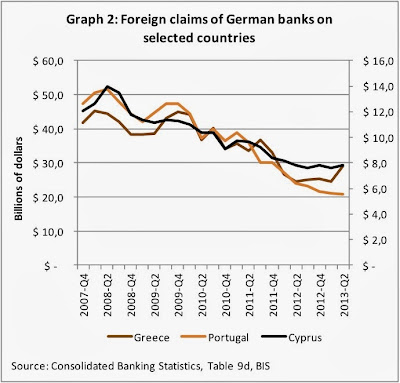 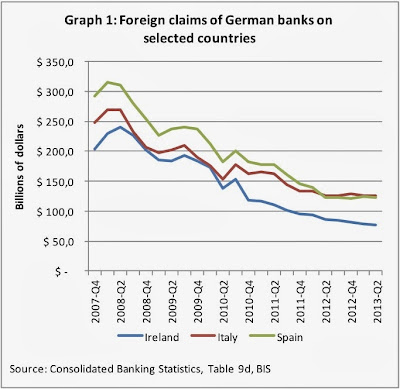 The crisis of 2008 hit German banks severely, not only because they had bought significant volumes of asset-based securities in the US, but also because they had financed housing (and commercial property) bubbles in the periphery. Considering that their exposure to Ireland amounted to 137% of the Irish GDP, it is no surprise that the burst of the Irish housing bubble, among other measures, forced the German government to rescue Hypo Real Estate. But that was not the only public help they got: it is well known by now that the ECB forced the Irish government to make good the guarantees extended on the debt of its major banks. In any case, the financial crisis forced a certain retreat of German banks from periphery countries, though the same holds for the US. Around the second quarter of 2009 the situation had stabilized and they were willing to lend once again to these countries.

The Eurozone crisis was triggered in the last quarter of 2009 and early 2010, with the change in government in Greece and the recognition of its falsified statistics and bigger-than-expected fiscal deficits. At that moment, it became evident that Greek debt was not sustainable, that the government would not be able to face its commitments on its own, and that help was needed, either as a loan, as a debt restructure, or as both. Heck, even Keynes explicitly said that in situations like these a rescue was unavoidable, and he wrote that seventy years ago!

Eventually, loans were granted in exchange for the conditions already known by everybody. A debt restructure was implemented in October of 2011, and a second one followed suit some months later. However, that word “eventually” took a long time to materialize: those measures were implemented years after the burst of the crisis. In the meantime, as the graphs show, German banks substantially reduced their holdings of Greek debt (particularly avoiding the second Greek default), selling their holdings to the ECB, now a major creditor of Greece and other European countries with one of the worst implemented buying programs ever, and the European Financial Stability Facility/European Stability Mechanism (ESM) (check page 17-18). In Spain they also pulled out, before the required bank capitalization was implemented through loans from the ESM. In Cyprus they also pulled out, when it was clear that the Cypriot banks would need another bailout due to the impact of the first Greek default. The Cypriot bailout took place almost a year and a half after the first Greek PSI. That was the main benefit that German banks (and French banks too) got from the way the crisis was “managed”: time. Time to pull out, to heal wounds, to offload their holdings into the hands of the public sector, both at the national and the continental level.

Probably the first indication that the worst had already passed was the fact that Deutsche Bank did not participate in the Long Term Repurchase Operation 2 in February 2012. By the second quarter of 2012, that is, a quarter before Draghi announced the Outright Monetary Transaction (OMT) Program, the claims of German banks vis-a-vis Spanish and Italian debtors hit the floor, and the downward trend regarding Irish borrowers decelerated. They also got time regarding the implementation of the banking union and its different components. Whatever problems the German banks may have, their exposure to the European countries in difficulties is not a major one, perhaps not even a problem at all. And they do not need to lend to these troublesome economies: they have a booming housing market at home to feed.

The time German banks enjoyed to reduce their exposure to periphery debt was obtained by the German government (in particular the German Ministry of Finance), the Bundesbank and the ECB (especially during Trichet’s term). Blaming the “reckless spending spree” of Greek, Spanish, Irish and Italian governments, they refused to acknowledge any possibility of debt restructuring. The EFSF was instrumented when Greece was already bankrupted, and the increase on interest rates (as investors flee the countries) was used as a threat in order to force governments to implement austerity policies. We all know this. We all know the reluctance of the ECB to act as a lender of last resort, and then when they finally decided they had to buy some debt, they did it badly. Compare that performance with the announcement of OMT: without actually buying any bonds, the ECB has succeeded in lowering interest rates.

The Greek default is also illustrative. First it was plainly rejected; later they figured out that Greek public debt in the possession of the private sector had to be written down by 21%, later on they extended to 50%, and eventually it was around 70% NPV. Those changes took months.

The Bundesbank has been the main opponent to any measure that can reasonably help (in some measure or the other) struggling governments. In fairness, they didn’t even want those countries in the Eurozone to begin with. They opposed OMT, the buying of public debt, either because it was (in their interpretation) explicitly prohibited by the Treaty of Maastricht, or against its “spirit”. They reject the idea that ESM can lend directly to banks (instead of lending to governments); they are rejecting (or seeking to restrict) the supervision of German banks by the ECB, and rejecting any possibility of a redemption fund at the European level in case some money is needed in banks liquidation processes without burdening national governments. They have rejected granting a banking license to ESM. This position aims at securing the advantage of German banks vis-a-vis their competitors in the Eurozone, who are crippled not only by the poor state of their borrowers’ finances but also, in the periphery, by the interaction with the public sector’s finance, either as debtors, or as possible rescuers.

The government, in turn, takes more or less the same line as the Bundesbank. After all, because of this crisis the interest rate it pays is at a record low, allowing some savings of around 10 billion euros. Small and medium-size German companies, at the heart of the German economic success and an important source of votes for the CDU, are paying interest rates almost 2% lower than equivalent and equally competitive Italian SMEs, for instance. Germany is becoming the major destination for young and skilled migrants that want to escape the grim and hopeless situation in their own countries. German officials are explicitly encouraging this movement, which is worsening even further the long-term prospects of the economies affected. In some sense, it is actually quite hard to escape the conclusion that Germany is “stealing population” from the periphery.

But there were a couple of circumstances in which the views of the Bundesbank and the German government diverged. Strangely enough, in those episodes it seems that the Ministry of Finance agreed more with the Bundesbank than with the Chancellor. One such episode is the aforementioned dispute, described in the article from Der Spiegel, concerning the inclusion or not of Italy in the euro. The other major event was the vote in the Governing Council of the ECB regarding the implementation of OMT.

That proposal won with a result of 23 positive votes and 1 negative vote. And there are two German officials. Joerg Asmussen, a member of the Executive Board, voted in favor of OMT, while Jens Weidmann, the president of the Bundesbank, voted against it. This highlights, in my view, that when the time comes Angela Merkel is willing (much more than Schauble) to do the bare minimum effort in order to save the Eurozone.

The Bundesbank is not willing to do so. It is not willing, because major German banks do not need the Eurozone any more. Not only they dislike the measures that are on the table to regulate them, linked to the banking union (even though the German government is fighting tooth and nail to defend them); not only because they have to focus on healing their wounds from other messes (like their derivatives exposure and lawsuits in the US) and strengthening their capital ratios: but also because if, for instance, Greece leaves, there might be new opportunities for purchasing assets at an even lower price and realizing huge capital gains. Heads I win, tails you lose.

I will not discuss the benefits for periphery countries of leaving the Eurozone, as the big German banks (and the Bundesbank) want them to do. In my view, these benefits exist and are sound and solid. But even if they agree on this, the periphery should not expect any support from German banks. They will not oppose further austerity packages, but they will oppose any favorable measure. The measures that would solve the Eurozone crisis while keeping everybody on board are relatively easier to implement, from a strictly economic point of view, than the whole set of measures required for periphery states to leave in an orderly fashion and succeed as independent states. However, the political willingness in Brussels (and Berlin and Frankfurt) to cure the crisis is non-existent, and the views range from desire to keep starving the ill countries, to complete disregard for their fate.

*Ph.D. Candidate, Delft University of Technology. I am very grateful for the comments and suggestions of Frances Coppola, Jan Kregel and Matías Vernengo, though the views and possible mistakes of this article should be attributed only to myself.
By Matias Vernengo - December 06, 2013